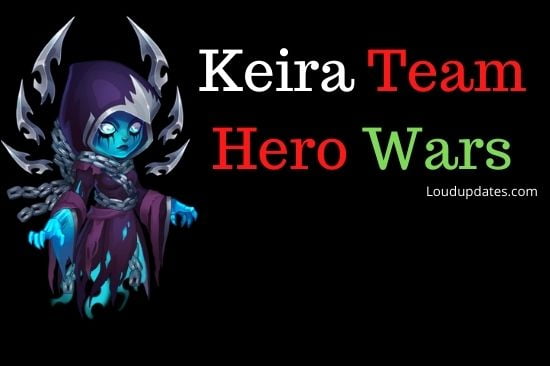 Do you want to know more about the Keira team hero wars? then we will discuss this in this article. Keira is the real hero when it comes to taking down enemy teams on short notice. Keira has several team lineups for the Hero War Game – both Facebook and mobile versions.

This team is good, You can select this team for your next war and defeat your enemies. This means that this version is only used for the mobile version where Phobos, Keira & faceless are also considered Undead type heroes.

This is a big hit for the team. Keira will do a lot of damage to the enemy team, I think all teams help Keira damage and now Keira damage is more increased.

Do you know Keira proc pure damage? If you use Keira power properly then your enemy easily dead. Qing mao is a good fighter character. Qing mao can defeat enemies boos and you can win the game easily if your enemies are with good power then qing mao use more power to defeat enemies.

So if you don’t have Keira winter skin then you can select qing mao and you can out Keira from your selection.

This team is working with the Facebook version. Andvari providing protection to Keira from knock-ups and now you can save Keira from Andvari power. So with this team, you can easily kill Twins & Karkh.

So in this team, you can use Andvari for saving your team from Twins & Karkh. From other team members, you can fight and defeat your enemies. If you know more about this team then share it with us then other people will take benefit from these tips.

Developer changing Sebastian with Andvari. I hope you know about Andvari. this character is a good hero. Andvari will protect all team members from enemies.

So I hope you learn something from this article. If you have any questions and any other information in your mind please share with us then other people will read your information through the comment section. Thanks for spending your time with us and reading Keira Team Hero Wars.

How Much Does it Cost to Start a Blog